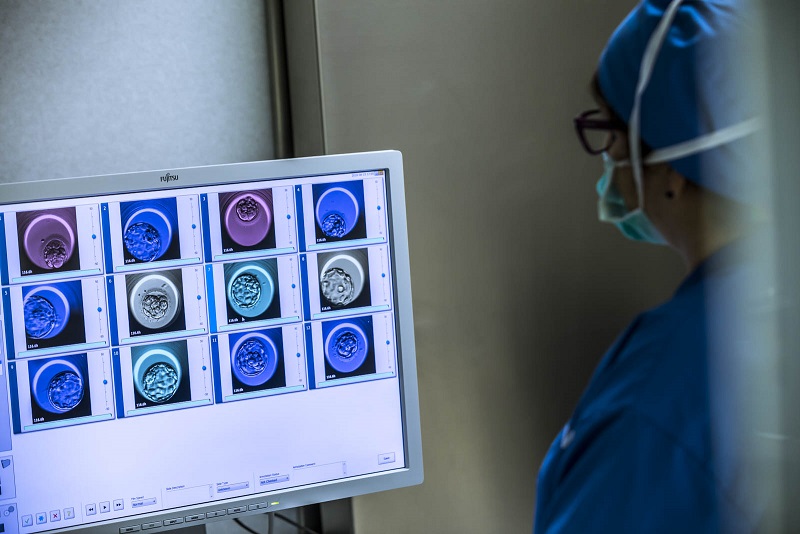 The human females have lower fertility compared to many other species and their fertility decrease significantly as they age. It is believed that aneuploidy, the presence of an abnormal number of chromosomes, is one of the main limitations of human reproduction, as it is responsible for approximately 50% of early pregnancy losses. In addition, aneuploidy rates are remarkably high in in vitro fertilized human embryos, with up to 50% of embryos diagnosed as aneuploid, as shown by preimplantation genetic testing for aneuploidy (PGT-A). However, scientific information is still lacking on the consequences for the development of specific aneuploidies.

“The primary aim of our study was to gain insight into the post-implantation development (or lack thereof) of aneuploid human embryos. In this collaborative study, we worked with Dr. Magdalena Zernicka-Goetz from the University of Cambridge, and used the culture platform developed in her laboratory. We found that her culture system provides an excellent system where embryo development can be studied and preimplantation genetic testing can be validated”, said Dr. Emre Seli, Chief Scientific Officer of IVIRMA Global and author of the study. Other key contributors include Dr. Richard T. Scott Jr., and Dr. Antonio Pellicer.

Aneuploidy can lead to implantation failure, miscarriage and birth defects. Since very little is known about the impact of specific aneuploidies during the early stages of human embryo development, the point at which embryos with aneuploid cells die remains unclear. This lack of knowledge is largely due to the technical challenges in studying human embryo development beyond implantation (day 7), a period involving intensive growth, morphogenetic remodeling, and changes in the identity and destination of stem cells. Recent technical advances have allowed human embryos to develop beyond day 7 and up to day 12/13 in vitro, in the absence of maternal tissue. Embryos cultivated in this system recapitulate the main morphological transformations of embryos in in vivo development, meaning that this culture method offers an unprecedented opportunity to characterize the early development following the implantation of human aneuploid embryos in vitro.

“We found that trisomy 15 and trisomy 21 embryos grow and differentiate similarly to euploid embryos –which contain normal chromosome number of 46– during the second week of embryonic development, unlike monosomy 21 embryos, which show high rates of development arrest. We also delineated molecular mechanism of embryonic failure in Trisomy 16 embryos. In addition, we discovered three cases of mosaicism –alteration in the number or translocation of the chromosomes that make up an individual’s cells– in embryos that were initially diagnosed by PGT-A as fully aneuploid, highlighting the potential of our human embryonic platform to determine the extent of genetic mosaicism and its influence on human development after implantation”, explained Dr. Seli.

The study, recently published in the prestigious scientific journal Nature communications, also analyzes the first 5 to 6 days of development in 9,803 embryos with single chromosome aneuploidy, of which 4,712 were autosomal monosomies, 4,717 autosomal trisomies and 374 sex chromosome aneuploidies, and compares them with 25,368 euploid blastocysts. Using this large dataset, the study characterizes the developmental characteristics of individual human aneuploidies and opens the way for future studies.