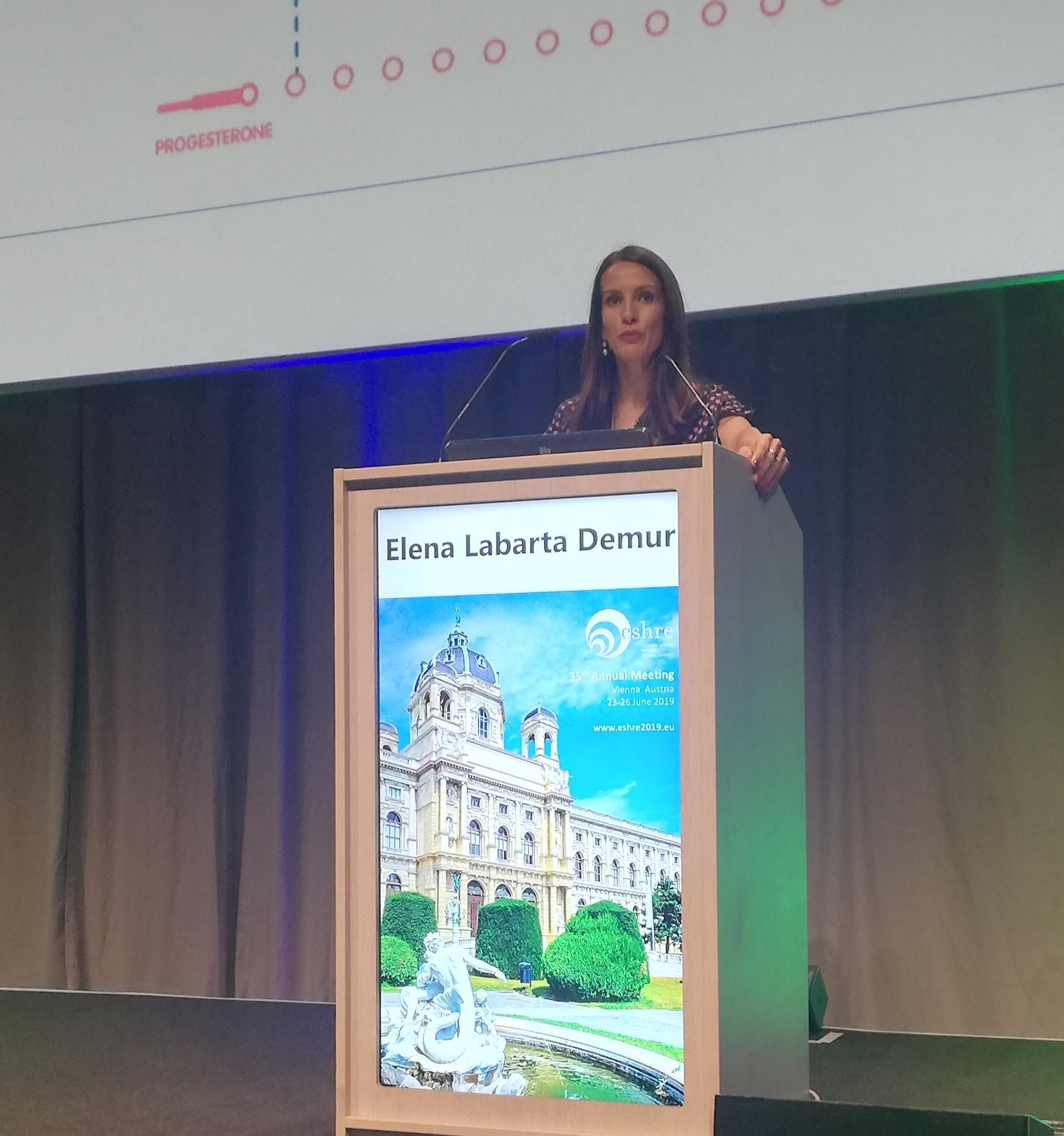 The importance of progesterone during pregnancy and even for facilitating the implantation of the embryo prior to getting pregnant is widely known, but what if we could establish a causal relationship between the levels of progesterone and success rates in reproductive treatments? This is the starting point of a study entitled “A large prospective trial in unselected population confirms that low serum progesterone on the day of embryo transfer impairs pregnancy outcome in artificial cycles”, presented by Dr. Elena Labarta, an IVI gynecologist, during the 35th European Society of Human Reproduction and Embryology (ESHRE) taking place in Vienna.

“During the last 3 years, we have been investigating the impact of progesterone values in the blood on the embryo transfer day, on the pregnancy rates in artificial endometrial preparation cycles. Until now, based on the studies carried out by other groups, it was believed that said measuring was of no use, as deemed unable to reflect progesterone´s action on a local, uterine level and that, additionally, the administered progesterone dose was more than enough to meet the needs of any patient. However, our discoveries questioned this tenet and have proven that serum progesterone levels are indeed associated with pregnancy outcomes. We carried out the first two prospective studies on the matter, which in total include 1.4000 patients, thanks to which we could affirm that there is a progesterone level below which on-going pregnancy rates may drop up to 20%, a drastic decline in reproductive treatments success rates”, says Dr. Labarta.

According to the latest analyzed data presented in this congress, a progesterone cut-off value was found, below which the results are significantly worse. And so, the patients with serum progesterone levels lower than 8,8 ng/ml on the embryo transfer day display a 18% lower ongoing pregnancy rate. These results suggest that the absorption of vaginal progesterone may vary among patients, influencing the marker in the achieved results.

This study, exposing results of a group of nearly 1.200 patients, aroused great interest among the scientific communities and has been presented in various forums and congresses around the world due to the impact it has on the future of reproductive medicine.

Already in 2017 a research group headed by Dr. Labarta published the first prospective study with the aim of analyzing this problem, carrying out pioneering work to show that there are serum progesterone threshold levels on the embryo transfer day, below which the ongoing pregnancy rate decreases dramatically.

“Those findings attracted our strong interest and we are carrying out various lines of research. On the one hand, we have seen the progesterone level predict the result not only if measured on the embryo transfer day, but also over the course of the luteal phase (from the day the embryo gets implanted until the day the pregnancy test is taken). On the other, we are discovering the way to rescue the cases in which the values of progesterone are sub-optimal and the results are truly encouraging, as we have seen that the situation can be reversed if detected on time. An important finding which keeps helping us in our constant search for the best possible reproductive results” adds Dr. Labarta.

Apart from Dr. Labarta, invited by the ESHRE committee to give a lecture on the subject, Dr. Ernesto Bosch, medical director of IVI Valencia and Dr. Nicolás Garrido, IVI Foundation´s director were summoned to present their respective work during invited sessions due to its scientific value.

Dr. Bosch presents the main lines of research regarding managing high response in accordance with ESHRE guidelines, in which he participated as the only Spanish member of a team which during the last two years has been defining the guideline on ovarian stimulation.

As for Dr. Garrido’s contribution, he talks about the techniques and sperm selection criteria as one of the fundamental points to enhance reproductive success, with a special focus on smart sperm selection methods, based on molecular features as a mechanism for selection protocols improvement. These procedures would complement or replace the current ones, which are autonomously done by the sperm cells or subjectively decided by the operator, by an oriented and objective practice, that ultimately improves clinical results by selecting and using the most suitable sperm cell among millions.

The fourth invited session, in whose research process Dr. Roberto Matorras of IVI Bilbao took part, addresses the ESHRE’s recommendations of good clinical practice for follicular puncture, by means of an evidence-based analysis, as well as the search for consensus of the experts in those areas where there was no bibliography.

ESHRE is the biggest Human Reproduction European Congress, a meeting place for the great professionals coming from different parts of the world, where every year they reach meaningful conclusions that will define the future of the reproductive medicine field.

49 communications by IVI got accepted in this edition’s main program, 14 of which oral and 31 in form of posters, in addition to the 4 aforementioned sessions.