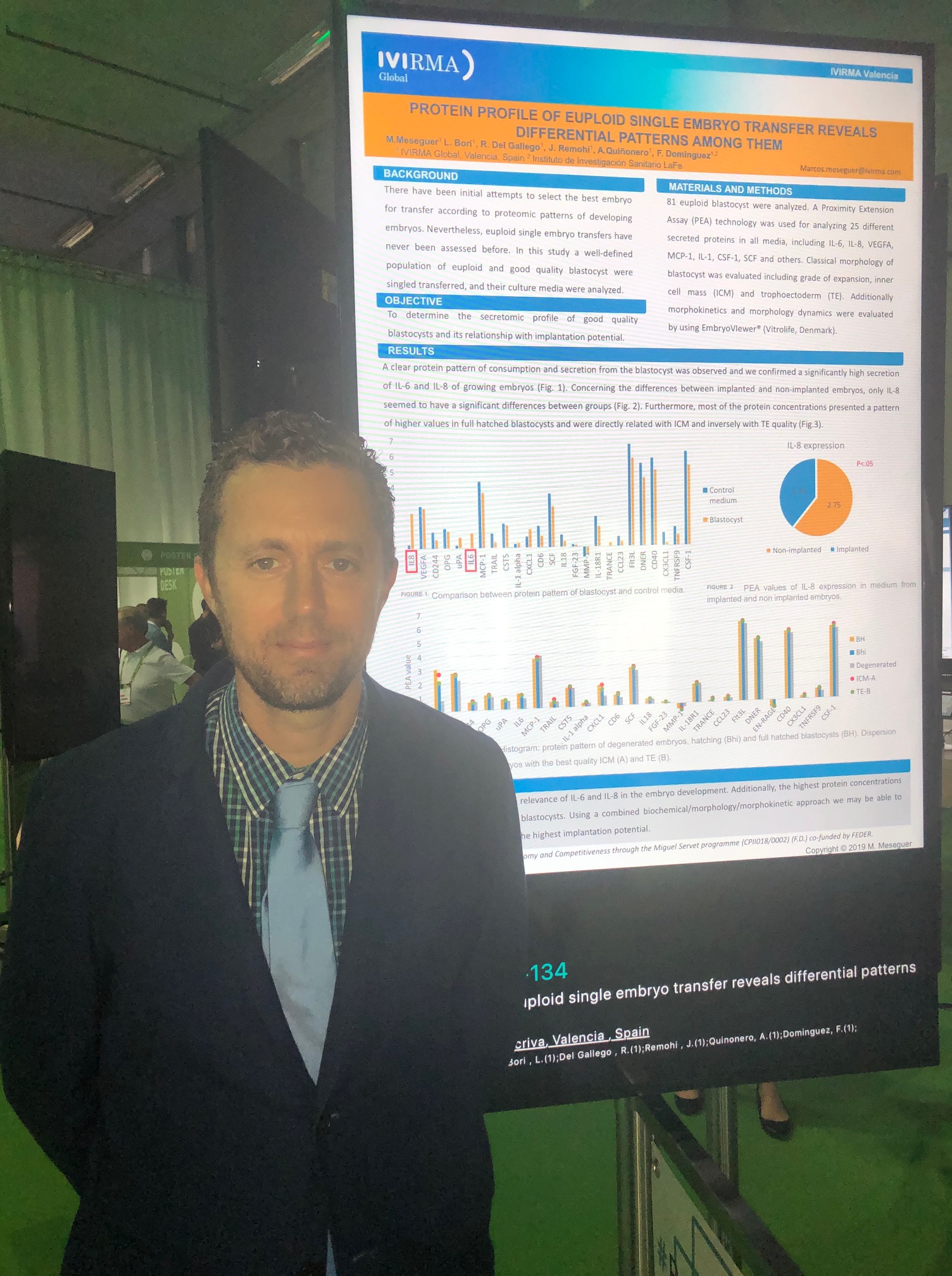 One of the lines of research in which most resources are currently being invested in the field of Assisted Reproduction is perfecting embryo selection. Recently, the use of Artificial Intelligence to achieve a degree of automation when choosing embryos or in performing genetic analysis has represented a step forwards in terms of perfecting selection and, consequently, improving results.

Within the framework of the 35th Annual Meeting of ESHRE, which was held this year in Vienna, IVI presented two new studies relating to analysis of embryo culture medium, based on analysing the environment in order to know with the greatest possible reliability the quality of the embryos and, as a result, to increase the patient’s chances of success during treatment.

In the first of the studies presented in this respect, “Protein profile of euploid single embryo transfer reveals differential patterns among them”, which was carried out at IVI Valencia between September 2017 and March 2018, with a sample size of 81 cycles prepared for transfer of a single embryo (Single blastocyst transfer – SET), the proteins secreted by the embryo into the culture medium were analysed.

“The importance of this study lies in the fact that these are embryos that have already been genetically tested and found to be euploid. It has a higher value given that, in spite of being genetically selected embryos, not all of them manage to implant. As a result, the idea is to improve the selection process by protein analysis. In this study we used, in part, Artificial Intelligence, along with the images that we obtain from the Embryoscope and the Geri (two models of cinematic incubators), developing a method that combines images with the protein selection method,” said Dr Marcos Meseguer, the lead researcher on the study and Head of Research at IVI Valencia.

“We confirmed a significantly high secretion of IL-6 and IL-8 in growing embryos, focusing on the potential of these molecules during development of these embryos. The majority of the protein concentrations presented a pattern of higher values in hatched blastocysts,” he added.

The second of the two studies presented, “High culture media oxidative profile as a biomarker of good quality embryos: a non-invasive tool to select the embryo to transfer”, is based on studying the culture medium with multiple embryo development, in situations in which between 10 and 12 embryos are contained within a single drop. The objective was to analyse whether the oxidative profile could be a good biomarker for determining embryo quality.

According to Dr Meseguer, “we assessed when all of the resulting embryos are cultured together, and detected that there is a different oxidative profile when the embryos are good quality and when there are parameters that cause them not to be viable. We have developed a method for assessing the environment where many embryos are growing. By not developing an individual study, we analysed the oxidation that is generated as a measurable value in the medium in which the embryos are cultured. The more active and the better quality the embryos are, the more oxidation they cause within the culture medium. This indicates that they will be better prepared for being transferred and ensuring a higher success rate in the cycle for the patient. On the contrary, in the classification criteria, the level of oxidative stress decreased in line with a reduction in embryo quality.”

The study presented, which was also carried out at IVI Valencia, analysed a sample of 683 embryos from a total of 174 cycles that were performed by means of In Vitro Fertilisation (IVF), between May 2017 and December 2018.

ESHRE is the top European conference on Assisted Reproduction. It is the place where the best professionals from all over the world come together, and where, every year, they reach important conclusions that map out the future in the domain of reproduction.

On this occasion, IVI had 49 contributions accepted in the general programme: 14 of these were oral along with 31 posters, added to which 4 papers were presented.

PrevPreviousA low progesterone level in the blood may reduce the chances of having a baby by 18%
NextIn Landmark Study, IVIRMA Shows Abnormal Embryos Fail to Implant or Lead to Ongoing PregnancyNext