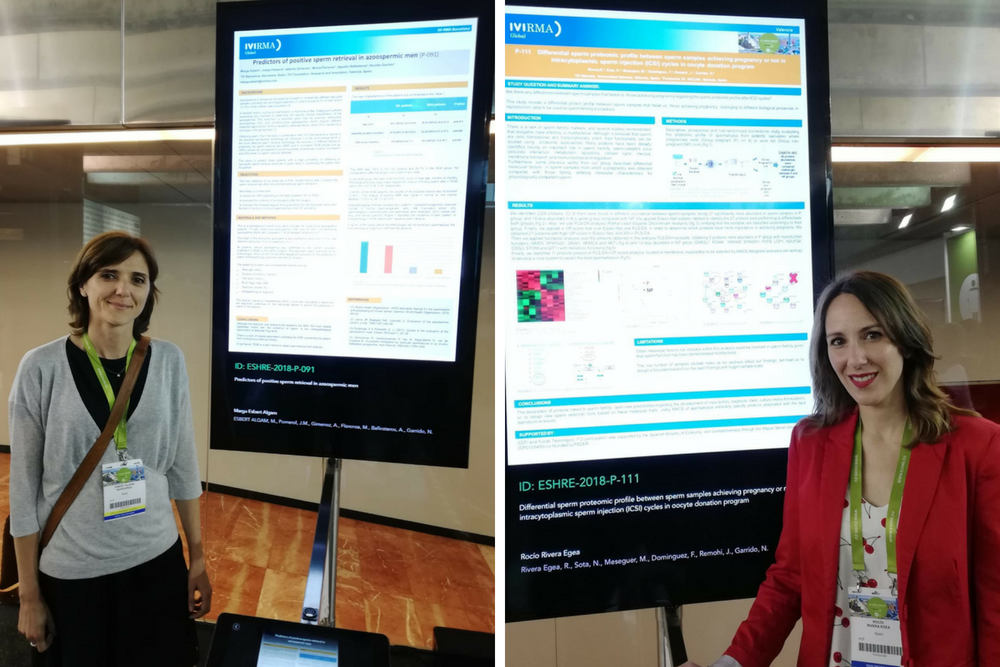 As part of the 34th Congress of the European Society of Human Reproduction and Embryology (ESHRE):

Male infertility, which accounts for 40% of the cases of infertility, often remains in the shadow of female factors that are considered more important. In the past decade, IVI has been committed to the investigation of male infertility; this commitment is demonstrated by the four male infertility studies that are being presented at the prestigious ESHRE congress; two of which are summarized below.

Azoospermia (absence of sperm in semen samples) requires a testicular biopsy to determine whether the testicle generates sperm, which can then be used for treatment with assisted reproductive technologies. It would, therefore, be a great step forward to discover a non-invasive alternative that would allow clinicians to predict the presence of sperm in the testis without the need for an invasive procedure.  Dr. Marga Esbert, at IVI Barcelona, has studied the predictive power of certain clinical factors indicating the presence or absence, of sperm in the testis. In her study, data was collected from all the azoospermic men at IVI Barcelona who had undergone testicular biopsies between 2004 and 2017. From a total of 96 men, different parameters were analyzed, such as age, duration of infertility, serum FSH level, body mass index, size of the testis, and type of pathology.

Dr. Esbert states “Sperm was recovered from 100% of men with obstructive azoospermia.  However, in men with secretory azoospermia the percentage dropped to 29% and they (these men) would have most benefited if we could have predicted the presence of sperm using a non-invasive method,” and continues “a number of markers have been investigated in the past, but, at the moment, there is no scientific consensus. We discovered in this study that based on the testicular volume we can estimate the presence of sperm in the testis quite reliably. We are working to identify additional biomarkers, and the next phase of our research will be focused on finding proteins and microRNAs from the samples of azoospermic men to help us predict if the testis is functional. “

In a different study, Dr. Rocío Rivera from IVI Valencia investigated the protein profile of sperm samples to identify proteins associated with a positive pregnancy outcome. She used cycles performed with egg donors in order to avoid bias from different types of female infertility. Dr. Rivera stated “after analyzing the proteins that make up the sperm, we could identify the ones associated with reproductive success vs failure. Dr. Rivera added “with this study we have characterized the protein profile of the samples of those patients who achieved pregnancy and those who did not. We have verified that there are differences in terms of proteins and that these can serve as markers that will allow us to separate sperm based on their ability to cause pregnancy. Furthermore, using the MACS technique, the sample could potentially be enriched with sperm that contains the optimal proteins for a successful outcome; this, of course, remains to be further tested”.

Azoospermia consists of the absence of sperm in the ejaculated semen, the obstructive azoospermia is the less severe form. It consists of a defect in the seminiferous tubes or the vas deferens that prevents the exit of sperm during ejaculation.

Secretory azoospermia is more serious as it involves a defect in spermatogenesis (the process of formation of male sex cells).

MACS is a technique that allows the selection of sperm with the best characteristics to be used in assisted reproduction treatments.