As part of the 34th Congress of the European Society of Human Reproduction and Embryology (ESHRE):

A study conducted through a collaboration between IVI and La Fe Hospital in Valencia is providing hope to women who are poor responders, and those who suffer early ovarian failure. IVI is pioneering the research on ovarian rejuvenation via the infusion of bone marrow-derived stem cells (BMDSC) through the ovarian artery and reported that three babies were born using this technique.

This study, led by the co-president of IVI, Prof. Antonio Pellicer together with Drs Sonia Herraiz at Fundacion IVI and Monica Romeu at La Fe hospital in Valencia with the collaboration of Dr. Nuria Pellicer, resident doctor of this hospital, is moving on to its third phase with promising results. After the first phase in an animal trial, where human tissue was implanted into mice to verify the effectiveness of stem cell treatment, the study progressed to a second phase with twenty low-responder patients,  in which, the stem cells were mobilized and extracted from the peripheral blood, and re-introduced to the ovary to reverse the aging process and activate dormant follicles.

All these advances will be presented at the 34th edition of the ESHRE congress, by Dr. Nuria Pellicer, who explains: “In the second phase we saw that the technique helped to improve the ovarian response, thereby increasing the production of oocytes.  However, as these were low responding patients of advanced maternal age, a high percentage of the embryos had meiotic errors and therefore resulting embryos were aneuploid. In addition, there was a lot of variability among the low responding patients and, sometimes, the variability could complicate interpretation of the results.  Our findings led us to conclude that menopausal or pre-menopausal patients with impending early ovarian failure, could respond better to the treatment and we, therefore, designed a new study to test this prediction, where women under 38 years of age with early ovarian failure will be recruited. “

The findings presented at ESHRE have already been accepted by Fertility & Sterility, one of the leading scientific journals in the field, and will be published soon.

As pointed out by Professor Antonio Pellicer, the senior investigator of the study: “In the near future, we hope to induce follicle development and rescue fertility in women with ovarian failure by introducing BMDSCs to the ovary or, preferably, by merely increasing the number of BMDSCs in the circulation. Our aim is to develop a technique as non-invasive as possible and then achieve standardization so that it can be applied clinically “.

Importantly, in addition to ovarian rejuvenation via the infusion of BMDSCs into the ovarian artery, another technique based on fragmentation of the ovarian tissue, called ovarian fragmentation for follicular activation (OFFA), is under investigation at IVI, in collaboration with La Fe Hospital, Valencia, with equally promising results that will soon be revealed. 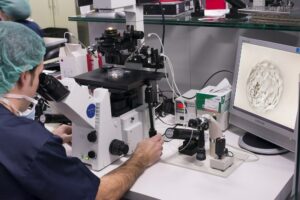