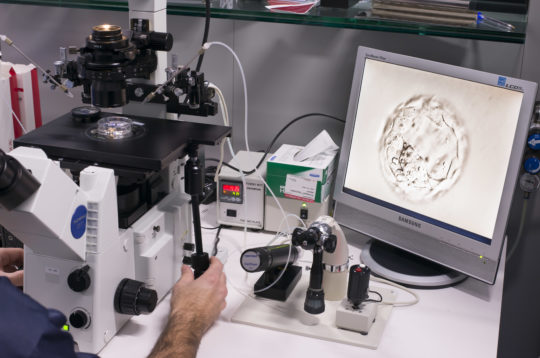 Historic studies reaffirm the accuracy of embryo genetic testing; show women with three euploid embryos have a 95% chance of pregnancy; and reveal IVF babies have equaled their naturally-conceived counterparts in birth weights for the first time

BASKING RIDGE, NJ, October 14, 2019 – RMA, the nation’s most research-focused fertility network, has released a trio of watershed studies that spotlight the industry’s dramatic achievements in safety and success, and give those struggling to conceive around the world reason to not only be hopeful – but confident – they can achieve their parenting dreams.

The research, unveiled at the annual meeting of the American Society for Reproductive Medicine (ASRM) in Philadelphia, charts the arc of the In Vitro Fertilization (IVF) patient journey, and offers optimism at every major point in care – from genetic testing, to implantation to birth.

⦁ First, a non-selection study proved that an embryo genetic test that identifies abnormal embryos was accurate, giving patients peace of mind they are not discarding normal embryos.

⦁ Second, a study into implantation rates found that women with three normal embryos have a 95% chance of pregnancy, giving patients optimism about their success with normal embryos.

⦁ And third, a retrospective birthweight study found that IVF babies are now born with the same weight as babies conceived without the procedure, a historic victory that gives patients trust in the evolution and safety of IVF.

“Taken together, these studies point to just how far the industry has come,” said RMA founding partner Dr. Richard Scott. “They show that genetic testing works, that euploid, or normal, embryos have a high chance of leading to pregnancy, and that IVF babies are now born with weights that support healthy development.”

“This is a big moment for anyone who has ever wondered whether they could have a family – the odds have never been more in their favor.”

The birthweight study, led by RMA second-year fellow Dr. Julia Kim, tracked RMA’s IVF birth weights from 2000 to 2017 and found a steady increase over time that in 2017 reached parity with babies born without IVF. Of all the babies born to mothers that received IVF in 2017, only 10.7% were born with a low birth weight (less than 2,500 grams), RMA found, compared with 8.3% of babies conceived naturally, according to the Centers for Disease Control and Prevention (CDC).

The study on implantation, led by Dr. Paul Pirtea, found that women who have three chromosomally-normal embryos as a result of IVF have a 94.9% chance of achieving pregnancy. Implantation, or pregnancy, rates were highest for the first transfer of a euploid embryo: it stood at 69.4%. Implantation rates for the second euploid transfer were 59.3% and for the third, 59.2%.

The non-selection study, led by RMA third-year fellow Dr. Ashley Tiegs, found that Next Generation Sequencing (NGS)-based genetic testing of embryos, known as PGT-A, correctly identifies abnormal embryos that have little chance of leading to a viable pregnancy, with all 50 embryos diagnosed abnormal by the testing platform having either failed to implant or led to miscarriages following transfer. The research is ongoing, aiming to collect data from 600 couples.

Researchers from RMA’s sister clinics at IVI also submitted several significant studies to ASRM, adding to the optimistic work stemming from the IVIRMA Global family. Dr. Marcos Meseguer from IVI Valencia, in Spain, led a groundbreaking study on the use of Artificial Intelligence (AI) to determine embryos likely to result in a live birth, and found that AI was 96% effective in predicting success. Dr. Marga Esbert from IVI Barcelona led research that found immature female eggs, usually discarded following egg retrieval because they were thought to lead to abnormal embryos, can be matured in the lab – and don’t have higher aneuploidy rates than eggs mature at the time of retrieval. Dr. Ana Corachan, from the IVI Foundation, found that long-term Vitamin D treatment reduced the size of benign uterine tumors called leiomyomas. And Dr. Nuria Pellicer, from IVI Valencia, found that, when women who had previously responded poorly to IVF had bone marrow stem cells injected into their ovarian artery, their blood proteins began to express differently – proteins associated with aging were downgraded, and those responsible for anti-aging upgraded.

The above studies are part of dozens of pieces of research RMA presents at ASRM as the practice marks its 20th anniversary this year. Since founding October 1, 1999, RMA has helped bring more than 40,000 babies to loving families, and continues to be the leading investor of IVF research in the U.S.