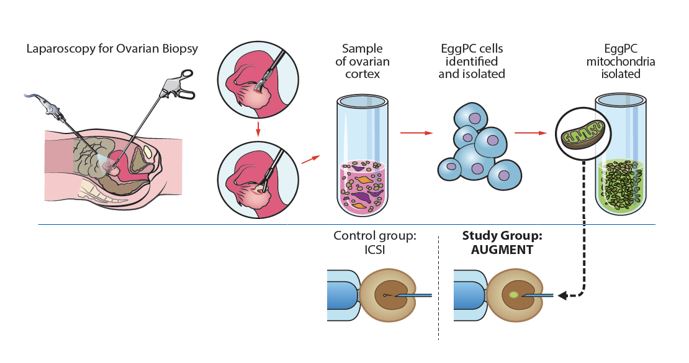 Energizing eggs with healthy mitochondria: A dream or a reality?

Female fertility is one of the first physiological functions adversely affected by aging. One important factor is the mitochondrial dysfunction that has been shown in patients of advance maternal age.

Mitochondria can be considered the factory of energy in the cells. In fact, they play a vital role in most cell functions by providing a steady source of adenosine trisphosphate (ATP) through oxidative phosphorylation (OXPHOS). The oocyte has the largest number of mitochondria and mitochondrial DNA copies of any cell. Maternal age is negatively correlated with the oocyte mitochondrial DNA (mtDNA) copy number, thus impairing processes of oocyte maturation, especially nuclear spindle activity and chromosomal segregation.

Several approaches have been proposed to overcome this problem.

Cytoplasmic transfer from young oocytes to the oocytes of older women with a history of reproductive failure showed to improve embryo development and delivery of live offspring, but this technique performed in the 90’s was abandoned because of the risk of mitochondrial heteroplasmy (presence of mitochondria from two different sources) and some cases of aneuploidy reported.

In 2014, a technique consisting of injecting autologous mitochondria resident in “egg precursor cells” (present in the ovarian cortex) into the egg of the infertile patient during the ICSI procedure was launched (the so-called Augment technique, from OvaScience). The advantage was the avoidance of heteroplasmy in the oocyte. Controversy came because the finding of these egg precursor cells could not be replicated in other laboratories. Some babies were born in Canada, United Emirates and Turkey, but the technique had been offered as the last chance to these patients before having performed a proper study analyzing its impact.

For this reason, an experimental randomized trial was performed in IVI RMA Valencia, Spain, headed by Dr. Pellicer and Dr. Labarta. Fifty-nine infertile patients aged 42 or less with background of unsuccessful IVF and evidence of bad embryo quality were included. An intrapatient comparison was done and oocytes were randomized to receive the experimental technique (Augment) or conventional ICSI. Results showed no benefit in terms of live birth rate, embryo grading or euploid status. Thus, the technique is not offered to patients anymore, as it is an invasive procedure requiring a laparoscopy for obtaining the sample of ovarian cortex.

Knowledge on nuclear transfer technologies for preventing mitochondrial diseases has opened a new line of research for these techniques in infertile patients with poor oocyte quality. Last April 2019, the first baby in the world was born in Greece thanks to the application of a maternal spindle transfer from an infertile patient to an oocyte donor. The technique is still experimental and not allowed in most of the countries, so we have to wait for the results observed in new cases and the health of the offspring.

The story continues, and for sure, ovarian rejuvenation is one of the main topics that is being investigated nowadays. In IVI RMA, several studies are being carried out in order to see the light in these infertile patients with such a bad prognosis.